A LEADER IN COMMERCIAL LITIGATION, GAMING AND MORE.

Mr. Bice is a co-founder of Pisanelli Bice, PLLC, a firm focused primarily on commercial litigation. Prior to forming Pisanelli Bice in 2010, Mr. Bice was a shareholder in his former firm, a member of its national litigation group, and the head of that firm’s Las Vegas office’s appellate practice. His diverse practice spans from complex business matters and gaming regulatory disputes to constitutional and election law controversies.

Mr. Bice’s advocacy is well known both in and outside of the courtroom, in state and federal court, and at the trial and appellate levels. A highly skilled litigator who is more than familiar with large and complex cases, Mr. Bice’s understanding of and experience with every stage of a case as it moves through the judicial system serves his clients well. His experience allows him to represent clients from start to finish, providing keen insight and astute precision of both the law and procedure. Mr. Bice has tried many cases to judgment in both state and federal court, and has successfully argued numerous appeals before both the Nevada Supreme Court and the United States Court of Appeals for the Ninth Circuit.

Mr. Bice was recognized as a “Top Ten Lawyer: Gaming” in the Las Vegas Business Press, adding to his Preeminent Martindale Hubbell rating, and his multiple “Best Lawyers in America” recognitions in the areas of commercial litigation, first amendment law, land use and zoning, and mergers and acquisitions. 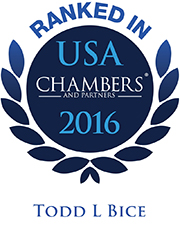 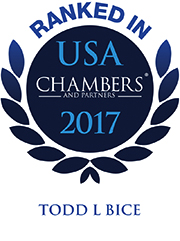 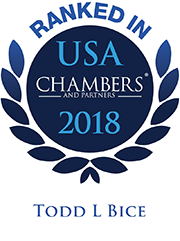