A SKILLED BUSINESS ATTORNEY THAT EXCEEDS YOUR OBJECTIVES.

Ms. Spinelli has been in practice with the firm since its inception in May of 2010, and has worked with Jim Pisanelli and Todd Bice since her legal career began.

Ms. Spinelli’s practice focuses primarily on complex commercial disputes in both state and federal court. Her cases range from business fraud to breach of contract, and touch upon areas of Nevada, U.S., and international law. As such, she provides advice to clients across various industries and is an integral part of nearly all of the firm’s high-profile cases.

During law school, Ms. Spinelli was a member of the American University Journal of Gender, Social Policy & the Law. She also served as a law clerk for the Prince George’s County Public Defender’s Office. Ms. Spinelli was a team leader/member of the UNROW international human rights clinic, which litigated two complex international human rights cases before the United States District Court for the District of Columbia and the U.S. Court of Appeals for the D.C. Circuit. To cap off her law school career, Ms. Spinelli worked as a part of the criminal defense trial team in a high-profile federal terrorism case before the Southern District of New York, United States v. Lynne Stewart. 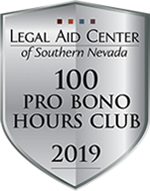